A Message From My Parallell Universe

A Message From My Parallell Universe

Those silly "Europeans" are playing around with mother nature.

Look what some joker (third down) posted in the comments! LOL! We all know around these parts that it's the thunder which causes it to rain!

Use lasers to generate lightning, which causes thunder, which forces condensation and then it rains. That way we can control where it rains. Every grade school child knows that - right?

Labels: There's nothing new under the sun especially if it has been done covertly for half a century


HIM - When love and death embrace


Illusions of Importance
by JeromeProphet

You were busy shadows, an unknown name, fleeting faces in other places.
I thought I recognized you, but probably not
it was just a thought.

I wad up the paper, and toss it into the garbage
it falls to the side
I didn't spend the time to read your story
And now it is too late
Posted by JeromeProphet at 11/13/2008 11:53:00 PM No comments: Links to this post

That's true he isn't responsible for a damned thing.

But he should be (bring up a pdf version of the chart above).

No one is saying that the Republican and Democratic (last two years) Congress didn't play a role in the problems the country is currently facing, but the Executive Branch carries out oversight - or in this case failed to do so.
Posted by JeromeProphet at 11/11/2008 10:02:00 PM No comments: Links to this post

Labels: Republican and Bush Apologist Attempt To Revise History Blaming Democrats For The Government's Failure To Regulate The Financial Services Industry But The Blame Falls Clearly on The Executive Branch

Grandfather - The Sleeper Has Awakended

Awoke from a dream about my grandfather - well sort of.

In the dream I am visiting, or touring, my grandfather's home. There are many small rooms off to the side which are private rooms. Some hold mysteries, or perhaps ghost are lurking about.

I am warned, but I brazenly enter, and pass through each room.

I find a scrapbook, or perhaps it is a yearbook with photographs that have been placed between the pages.

I flip open the book, and find a photograph which includes a photo of some members of my family including myself. There is a loving inscription by my mother, which I had never seen before, and I am amused, and amazed.

I then step outside and look around the house. I decide that the house is "too close" to other homes in the neighborhood - that is, I wouldn't want to live there, as there is not enough privacy.

Yet the old home is large, and spacious, and I walk through it again on my way to the back yard.

I notice the fence in the backyard needs work. One of the neighbors has a small work area in his backyard and has trespassed onto my grandfather's backyard - I make a note that if I buy the home I will rebuild the fence and end the trespassing.

Although I do not really seriously plan to buy the home - for it is haunted.

I awaken, and hear myself saying - Grandfather, the sleeper has awakened - which is a line, slightly modified, from DUNE.
Posted by JeromeProphet at 11/11/2008 06:26:00 AM No comments: Links to this post

Labels: A Dream About My Dead Grandfather's House Which Is Haunted

"Senior General Than Shwe Is Foolish With Power"

Here's the story from the BBC. 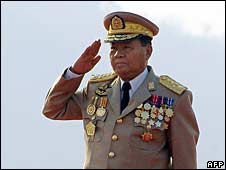 Labels: Sadly Burma Is Under The Control Of Ruthless Despots

What in the hell is going on?

Quite obviously I have stepped into the twilight zone.

Suddenly, or so it seems, the entire world economy is tittering on the brink of meltdown.

And while I have been screaming for years about how the Bush Economy is an economy based upon fraud - doesn't it just seem odd? That I was right - well, that is, that those I've chosen to believe were right?

Damn it folks what in the hell is going on?

Let's see how this whole scam was operated.

First comes - Deregulation - which means that the people who are supposed to keep this from happening are removed, or corrupted, or actually just don't care. The foxes are put in charge of the hen houses.

Deregulation - which floats the economy far higher than it should have since it was based upon a mountain of bad (unregulated debt).

Then as the Bush Clown and his merry band of thieves leave office the house of cards comes crashing down.

And everything is hitting the dirt.

We are in effect being asked to bail out nearly every major sector of the U.S. economy - except big oil, and big pharma - which are perfectly fine since they've been allowed to ream out the entire population for eight long years.

Is anyone going to jail over this?

It's as if all those millionaires and billionaires who profited off of this did so in fact with tax payer money - just in a delayed fashion.

These ultra well paid CEOs, and their henchmen who ran their companies into the ground, who would claim to be Republicans and Conservatives and Freemarketers, and Capitalist are in fact stealing from the U.S. Taxpayer like no other group of scum in the history of this nation.

Instead many of the main culprits will find themselves hired as consultants to help in the "bail out".

And while it thankfully has led to a new administration it speaks loudly of why it is that people like GWB go into public office in the first place.

People who hate government go into it for the profit, not the service. They go into government to ruin government and to sac the treasury, and steal from the people.

The government has taken these steps to aid financial institutions.

Term-auction facility: $1.4 trillion in loans to banks so far in exchange for otherwise unwanted collateral. The Fed increased its monthly auction limit to $300 billion in October, up from $20 billion when the Fed began the program.

Dollar swap lines: Unlimited dollars to 13 foreign central banks to provide liquidity to foreign financial institutions. The Fed lifted its cap after raising it to $620 billion in October from $24 billion in December.

Bear Stearns: $29 billion in a special lending facility to guarantee potential losses on its portfolio. With the lending facility, JPMorgan was able to step in to save Bear from bankruptcy.

Lending to banks: $77 billion lent on average every day to investment banks, after facility opened to non-commercial banks for first time in March.

Cash injections: $250 billion to banks in exchange for equity stake in the financial institutions in the form of senior preferred shares.

Mortgage-backed securities purchases: Up to $450 billion allotted to purchase troubled assets from banks.

Consumers are benefiting from the government's actions in recent months.

Stimulus checks: $100 billion in stimulus checks made their way to 140 million tax filers to boost consumer spending and help grow the economy.

Bank takeovers: $11.4 billion drawn down so far from the FDIC's deposit insurance fund after 19 bank failures in 2008.

Rehab foreclosed homes: $4 billion to states and municipalities in assistance to buy up and rehabilitate foreclosed properties.

Student loan guarantees: $9 billion so far in government purchases of student loans from private lenders. Higher borrowing costs made student loans unprofitable for a number of lenders, many of whom stopped issuing the loans.

Housing rescue: $300 billion approved for insurance of new 30-year, fixed-rate mortgages for at-risk borrowers. The bill includes $16 billion in tax credits for first-time home buyers. But lenders have been slow to sign on.

Uncle Sam has intervened to help companies in the following ways.

Fannie Mae, Freddie Mac: $200 billion to bail out the mortgage finance giants. Federal officials assumed control of the firms and the $5 trillion in home loans they back.

AIG: $152 billion bailout, including initial $85 billion through a direct loan and a $38 billion lending facility. On Nov. 10, new deal announced that includes a direct investment through preferred shares, easier terms on a $60 billion loan, and new facilities meant to take on the companies exposure to credit-default swaps.

This song has me betwixt.

Dave of The11thhour wrote a post about The Fixx, which has me thinking about the late 1970s, and early 1980s. Damn you Dave! Just joking buddy. Man the 1980s were weird - but in a nice way. By the way Dave and I were into New Wave much earlier than most here in Springfield, Illinois. Early enough to catch some flak about it. Ha. Remember Apple Tree Records?